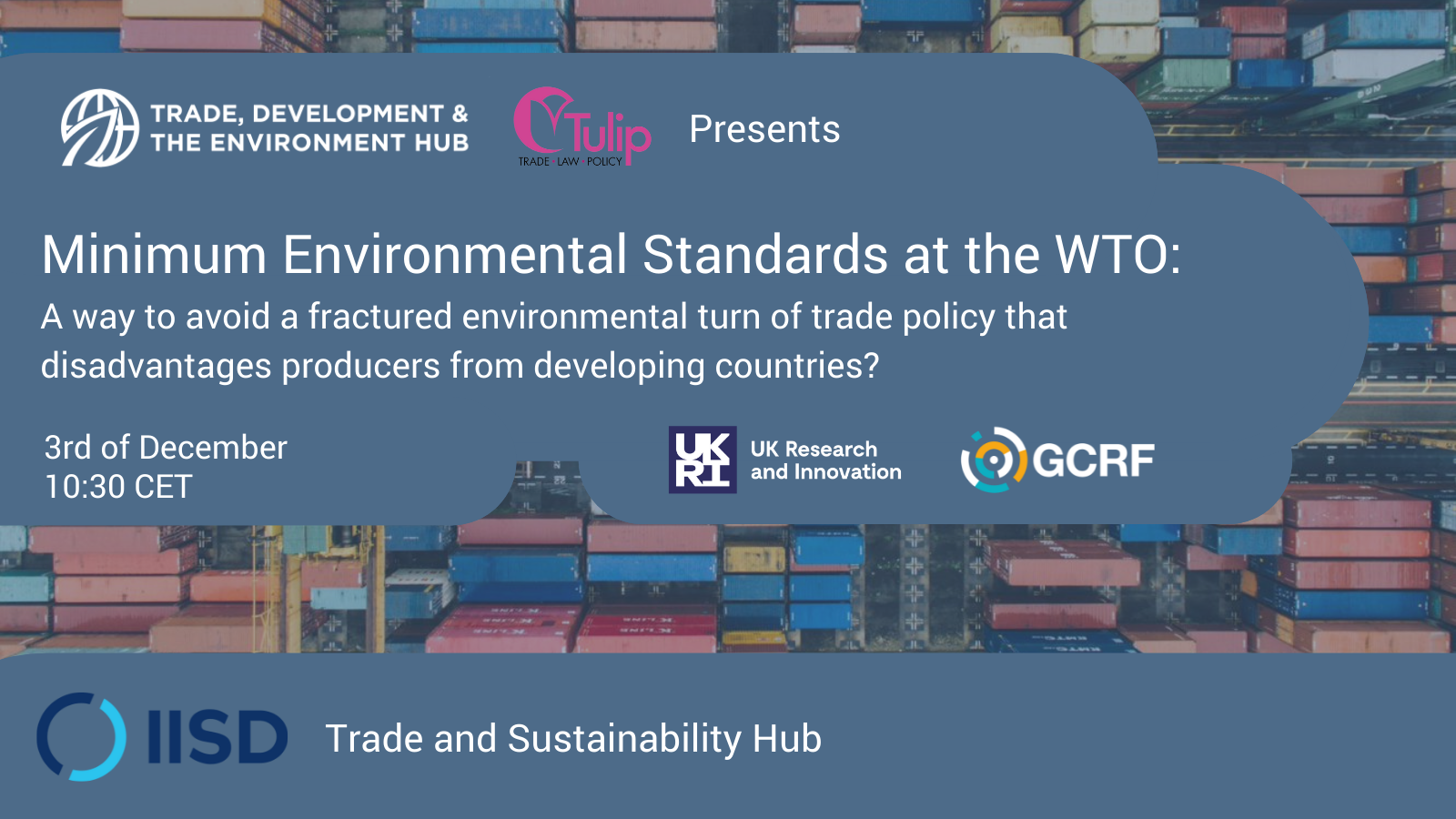 On Friday 3rd December 2021, the GRCF TRADE Hub in partnership with Tulip Consulting organized a panel discussion as part of the IISD Trade and Sustainability Hub 2021.

The discussion focused on the need to develop environmental minimum standards in the context of the WTO, in a similar vein to the Codex Alimentarius, currently applicable to global food standards. In particular, panelists explored how such an environmental minimum standard could promote a more sustainable global economy and potentially even help reduce – rather than add – to trade-related barriers for developing country producers.

Rising global and environmental challenges underscore the urgency to transition to a more sustainable global system of consumption and production. While a political and regulatory response to this crisis is urgently needed, the multitude of measures adopted by countries on national level is also posing a new set of challenges from the perspective of international trade governance.

For example, compliance with a multitude of new technical environmental standards can be challenging for small-scale agricultural exporters in developing countries and Least-Developed Countries, in particular as these standards are rarely aligned across markets.

In this context, the panel discussion set out to explore whether a Minimum Environmental Standard at the WTO, applicable to agricultural goods and potentially other sectors, could offer a solution to this increasingly pressing challenge.

As highlighted by the first speaker on the panel, Colette Van der Ven, Founder and Director of TULIP Consulting, although the idea of Minimum Environmental Standards is a recent one, we can learn from similar existing instruments, such as the Codex Alimentarius. The Codex Alimentarius establishes an internationally recognized minimum standard for international food safety which has been developed by FAO and WHO, and is applied by the World Trade Organization. As Colette Van der Ven explained, the  Codex Alimentarius has been developed over a 100 year period, and evolved over time to become a globally recognised standard, highlighting the complexity of the task at hand in establishing globally recognised guidelines and standards.

WWF UK Chief Economist, Angela Francis explained that the similarity between food safety and environmental quality standards is central to the WWF’s proposed ‘Codex Planetarius’, which offers a conceptual framework for what a Minimum Environmental Standard for agricultural goods could look like. While thinking on the Codex Planetarius is still in early conceptual stages, the intent behind the proposal is, “to stand as a complement to the Codex Alimentarius, such that food safety and planetary safety go hand in hand”.

The third speaker on the panel, Karim Dostmohamed, Board Member of COLEACP, an organization that is representing agricultural exporters from African, Caribbean and Pacific (ACP) States, stressed that while political responses to climate change and other environmental challenges are critical, policy makers must not leave the poorest behind: Small-scale producers from developing countries and LDCs suffer the greatest impacts from climate change while having contributed the least to its cause.  Alongside the challenges faced by small-scale agricultural producers to adapt to climate change-related impacts, increasing demands from buyers linked to social, labour and environmental standards have posed difficulties for many producers. In the context of a proliferation of environmental sustainability standards, Karim Dostmohamed highlighted that a global sustainability standard is currently missing. This would, however, be essential to establish an effective global baseline on “what good looks like”. At the same time, Karim Dostmohamed cautioned that unequal access to resources between developed- and developing country producers to level up to new standards, risks leading to an externalisation of negative environmental impacts to developing countries and LDCs. This underscores the need for capacity building and financial assistance, but also to the importance of initiatives that help reduce and simplify trade-related requirements, while foreseeing realistic phase-in timescales to help small-scale producers adapt to new measures.

Finally, Lorena Jaramillo, Economic Affairs Officer of UNCTAD shared insights from her work with UNCTAD’s BioTrade programme, and the evolution of the BioTrade Principles and Criteria over time. BioTrade is an interesting case study, as it seeks to create trade-related opportunities for small scale producers in developing countries, centered around biodiversity-based and natural products at the highest social and environmental standards. As Lorena Jaramillo highlighted, the BioTrade guidelines are intended to help governments and businesses implement practices that are biodiversity friendly, contribute to poverty alleviation and are flexible enough to adapt to local and regional circumstances.

In conclusion, stakeholders highlighted that political leadership will be essential to advance this issue in international fora. In particular, panelists urged that an environmental minimum standard would need to be fair, and mindful of the challenges faced by the most vulnerable producers. Given the impossible task of creating a new global standard overnight, initiatives should work from the national level towards a regional/plurilateral standard that can be expanded over time. Finally, existing guidelines and standards can provide valuable insights to help countries develop a blueprint for a global environmental minimum standard applicable to agricultural trade and, over time, other sectors. Nevertheless, given the exceptional situation faced by policy makers today, it will be important to move at a much faster pace than ever towards an effective multilateral framework.

The session recording can be accessed here.