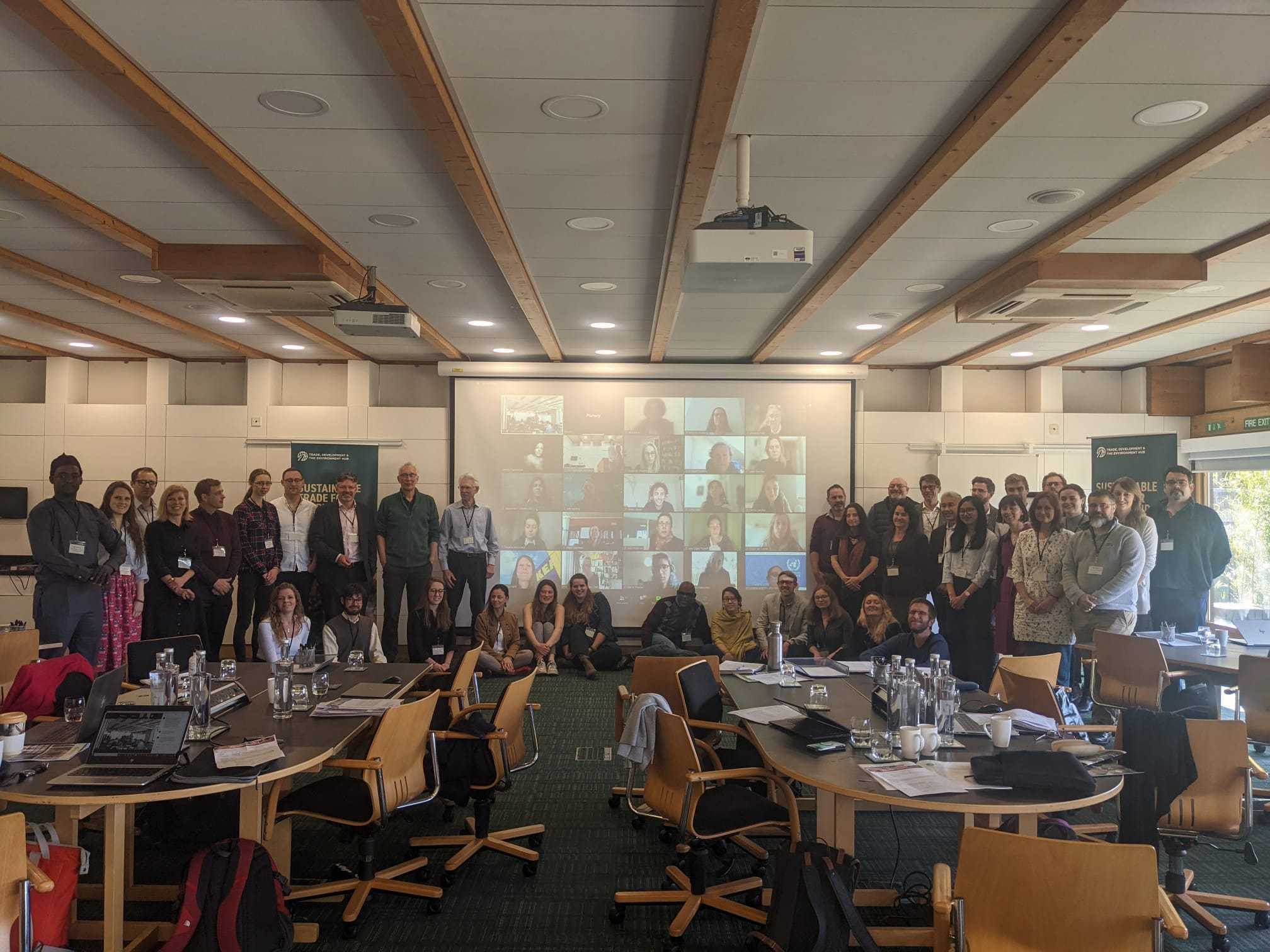 The TRADE Hub hosted a two-day meeting, on 20th and 21st April, to discuss sustainability in commodity supply chains. With idea exchange and collaboration between a broad range of relevant stakeholders, from researchers to representatives of private sector companies, the two days were then followed by a day-long internal meeting to bring together insight and action points resulting from the conference.

Invitees were hosted at the Møller Institute in Churchill College, Cambridge, to attend the two day conference. The sun beamed through the windows as stakeholders sat down to discuss how to create a future of trade defined by sustainable supply chains. UNEP-WCMC Director, Neville Ash opened the day by highlighting the key role that international trade plays in food systems, noting the doubling of agri-food trade in the last two decades, including to cater for consumer preferences, and underpinning global food security and nutritional needs. Following this, Neville introduced the purpose of the meeting in highlighting the importance of food systems as a driver of biodiversity loss, and some of the transformations needed in global food systems to ensure sustainability.

Prof. Neil Burgess, UNEP-WCMC Chief Scientist and Principal Investigator of the TRADE Hub, launched the newly released Impact Report, detailing the challenges of creating sustainable trade and the transformational change that the TRADE Hub helps drive. One challenge is understanding supply chains, which Dr. Jonathan Green from the Stockholm Environment Institute (SEI) addressed in his talk on different supply chain models. He discussed the models and their varying uses; while a life cycle analysis is useful for understanding the production process from its onset to consumption, a material flow account is more useful for following the journey of a specific commodity. These models can be used by companies to measure impact. Dr. Sharon Brooks, Principal Business and Biodiversity Specialist at UNEP-WCMC noted that companies will often measure impact to assess risk, or their performance against biodiversity targets, or as a part of external reporting and disclosure. She pointed out that dependencies are often overlooked, but dependencies are just as key in understanding supply chain resilience.

Pascal Lamy, Chair of the TRADE Hub Advisory Board zoomed out to the geopolitical context of international trade, examining changing trends such as a rise in the importance placed on sovereignty, collective dietary preferences in consumer countries and attitudes to waste. Pascal highlighted the idea of “precautionism” in which governments protect people from risks, such as environmental risk, and the difficulties that precaution presents in driving transformation in global trade. Sir Graham Wynne, Senior Fellow at the World Resources Institute proposed that more progress had been made on the biodiversity agenda in the last two years than the last twenty, including through a range of international and multilateral biodiversity measures and commitments, such as the Global Forest Finance pledge, with $12 billion in public funds and $7 billion in private sector and philanthropic commitments. He ended by mentioning the need to have integrated action between governments and the private sector, a task that the TRADE Hub also focuses on.

The afternoon had a series of talks related to private sector companies, with the first highlighting a study on reviewing the existing traceability mechanisms, pointing out that there is demand for businesses to trace the sustainability of their supply chains, as openness leads to increased brand loyalty and desire to work there. Sofia Gape, Sustainability Development Leader at the IKEA Sweden, stated that their “starting point is that sustainable living cannot be a luxury for the few”, and highlighted attempts to make sustainable furniture affordable, such as testing new ways for customers to have their products re-used and repaired, as part of their circular business strategy. Loraiza Davies, Partner and Environmental Specialist at Waitrose and Partners pointed out the difficulty retailers face in being able to know what is happening along their supply chains, alongside the need to streamline the tools available to help them better understand their supply chains.

The rest of the afternoon was taken up by a variety of breakout discussions between groups of people across different countries, sectors and interests, leading to a fruitful sharing of ideas and perspectives. Different issues were highlighted, such as the need to come to a collective understanding of what “sustainable trade” means, as a starting point for all trade-related discussions.

The sun shone just as brightly at the start of the second day, which began with the announcement of the Trade Tools Navigator. The navigator, launched by Julia Wentworth, Project Officer at UNEP-WCMC, puts over 450 trade tools and initiatives into a single platform to be more navigable and user friendly. The navigator will be of use to academics, government advisors and businesses in trade and production, with filters for relevant categories such as country and commodity.

The rest of the day was dominated by a series of breakout discussions, again grouped into themes with a variety of team members and stakeholders with different backgrounds exchanging thoughts on the shared issues, including commodity-focused discussion groups, such as on soy and cocoa. Insights were then fed back to the room as a whole. For example, in the soy discussion group, it was highlighted that there were research gaps in the social impacts of soy production, with this being an area rich with opportunity for further work. Later groups focused on various actors, such as banks, international organisations, governments and farmers.

Afternoon discussions were broken up with a talk given by Agus Purnomo, Senior Advisor for Sustainability at Golden Agri-Resources Ltd who pointed out that the businesses no deforestation commitment extends to all their supply chain, with information about estates, smallholders, dealers and agents continually collected. He also shared some of the outreach undertaken by the business, such as providing smallholder farmers with training on good agricultural products, as well as high quality seeds and fertilisers, and outlined their approach to supply chain transparency, with 96% of their supply chain mapped, from mill to refinery.

Attendees took lunch within the Institute, taking the opportunity to enjoy the sun. Discussions in breakout groups continued after lunch, extending into the late afternoon, brought to a close by Neil who gave a short review of the day’s session.

The day’s closing speech was given by Jonathan Hughes, WCMC Chief Executive Officer who began his talk by stressing that “One of the most pressing and emergent challenges facing nature at the moment is getting trade right”. He made three calls to action: “integration, navigation and location”. Integration involves bringing together social impacts and dependencies, navigation involves sharpening up the Trade Tools Navigator so that the best tools can get into the hands of decision makers, and location involves connecting global work and tools with what is happening at the farm level. He concluded his speech by arguing that “apathy is our biggest challenge – we need to wake people up”.

The TRADE Hub team were inspired towards future action.

Overall, the meeting across all three days re-affirmed the importance of sustainable trade as a driving force towards a better tomorrow, and the collaboration of key stakeholders demonstrated progress towards a more environmentally aware future for global trade. There was a lot of food for thought, creating a clearer path to next steps, such as more work in improving the navigability of trade tools and research focused on the social impacts of supply chains.

A detailed report of the meeting, including next steps and meeting outcomes, will be made available here.